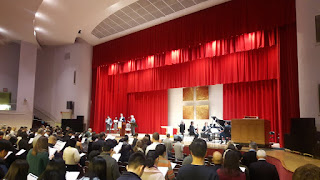 Abraham Cho
https://eastside.redeemer.com
If work is as glorious as Genesis says what's wrong with it?
1. Work becomes rebellion
They began saying to each other, "Let's make bricks and harden them with fire." (In this region bricks were used instead of stone, and tar was used for mortar.)
Genesis 11:3 NLT
https://bible.com/bible/116/gen.11.3.NLT
Come let us make a rival creation
The materials to be used was a statement of rebellion.
A tower to show the power of mankind. Set us up as gods to make a name for ourselves. So we don't have to fill the earth.
A motive in every heart to reject God. Hubris the fatal flaw that leads to failure.
Desire to scale the walls of heaven is our hubris.
Our work goes wrong when we get hit with hubris.
1. Love God
2. Love your neighbour. All we do is to be driven my motivation of love.
If not it becomes loving yourself. About winning and being in control. Toil by three sweat of your brow. It goes wrong when it becomes rebellion.
2. Work becomes salvation.
V3 moving East is going farther away from God
Then they said, "Come, let's build a great city for ourselves with a tower that reaches into the sky. This will make us famous and keep us from being scattered all over the world."
Genesis 11:4 NLT
https://bible.com/bible/116/gen.11.4.NLT
We want our name to be a top hit in Google
The Greatest Showman track is what my family is listening to.
The love story of creating the greatest show and looking for validation.
Come back home. I drank champagne with kings and queens. These eyes will not be blinded
We are most godlike when we're working. How am I doing things that only God can give. Only God
3. Work becomes defeat.
But the Lord came down to look at the city and the tower the people were building. That is why the city was called Babel, because that is where the Lord confused the people with different languages. In this way he scattered them all over the world.
Genesis 11:5‭, ‬9 NLT
https://bible.com/bible/116/gen.11.5-9.NLT
They are scattered. Babel the gate of the gods comes to mean gibberish.
Mercy is in God's response of scattering them. God confuses our languages to protect us.
Abraham was promised a name by God. As a gift of grace.
Our performances can never reach to heaven. Only God can reach us. Jesus came. The cross of suffering and shame is the human creation that reaches to heaven. Babel couldn't do it. Only the Prince of Peace could seal our salvation.
He is bearing our hubris to silence our discontent.
Come too Jesus today.
Let's pray.
Posted by Raymond Dueck at 1:58 PM