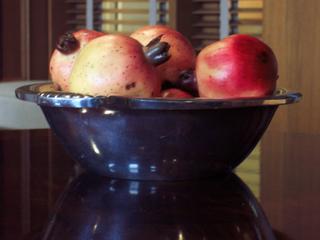 Keep it going and we'll get out yet!

Yesterday counts were wbc .8 anc .3 platelets 14 hemo 8.7
Today they were wbc .9 anc .4 patelets 92!!! hemo 9 - not sure if they might have made a mistake on the platelets count - last night Renee's platelets were so low she had to get an infusion - well it has never been that high before! If anc gets to .5 tommorrow she will be discharged.

I went to Trinity Baptist this morning. They had 3 baptisms and communion. Pastor is starting a series on Ecclesiastics.

Renee and I went to the rec area for a few hours. The NYC Comedy Fest starts today, and some of the best comics came to MSKCC to start the week here. One of them was from New Zealand. He had never been to NYC before so he tried to figure out what it was we thought to be funny. Not very funny.

Renee had a headache, decided to get some, sleep, and I'm blogging. I found a store that is willing to take some of Renee's pictures and try to sell them. I ordered 100 copies from a printer in Winnipeg, so we have a few to sell yet! Take a look and send us an email telling us what picture you want. Send your e to ReneePics@Duecks.com. For only $20 we will send you a 16 x 20 enlargement of your choice with 20 x 24" mat postage prepaid anywhere in US and Canada.

We moved to room 1425 to get away from the batty old lady. Renee's new roommate is Jill from Michigan. Her husband Rob has a hotel room in New Jersey and travels there and back every day. Jill has had a lengthy battle with cancer already. She is optimistic that she is going to beat it now. Renee's new bedside phone # is 212-639-4403. Her cell # is still 1-646-785-4343. She welcomes your calls.
Posted by The Duecks at 3:14 PM