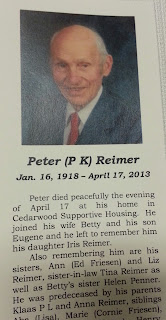 Uncle Peter was different and eccentric. A remarkable man. Uncle Pete arranged for aunt Esther's visits to Manitoba. He cared for her after she had a stroke. Nephew John arranged for her siblings to visit.
He was a good story teller. He loved to exaggerate his stories. At age 6 he drove the horses 20 miles with a load of grain and sold the grain and deposited the cheque before driving home.
At age 8 he started school read the book backwards and forwards.
He chased a rattlesnake and almost got bitten but knew not to chase rattlers again.
He was a renaissance man and could build good buildings. He was beggar poor and could not afford university. But he made sure his kids could attend university.
He remembered stories and told them 90 years later. When Eugene passed away 2 years ago he had a hard time with that. Children are not supposed to die before their parents.
Uncle Pete is now safe at home. Iris cared for him with love and care. He is resting under God's wings now.

Ed Reimer: Thanks for the invitation to share. Pete was a wonderful man. Never negative. He married my favorite aunt.
Dug a trench once when it caved in on Ed. Ed ended up going back to school and eventually earned his doctorate.
Worked with uncle Peter one summer. Was a lot of fun. He was a very supportive person. Worked into his 70's. Walked miles all over town well into his 90's.
We will be there for each other as we grow old and frail.

What a day that will be when my Jesus I shall see!

Ralph Unger:
Loved uncle Pete. Learned lots of lessons from him. The most important was forgiveness.
Luke 15: The prodigal sons. The younger brother was selfish and squandered his money. When hard times hit he ran out of $20s and friends.
Back on the farm they have a calf in the fattening pen. Father waits for the youngest son to come home so they can kill the fattened calf. He waits.
When the son shows up he forgives him immediately and puts on a big party.
The older brother is too selfish to appreciate the party.
God loves us so very much.

How Beautiful Heaven must be. Sweet home of the happy and free.

Posted by Raymond Dueck at 3:47 PM