The End of An Era at LVIV 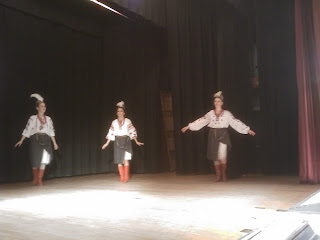 Alayna is doing her last week of performances at Folklorama. If you have not seen her perform, now is the time. There are 3 (6:45 8:15 9:45) performances each night at the Ukrainian Cultural Centre (corner of McGregor and Pritchard)until Saturday.
Later this month Alayna is planing to move to Toronto for her next year of University.

Tonight the show opened with the Dance of the Violins by the Yunisk ensemble. That was followed by a ''famous" soloist and other dances.
The fiddle group Northstar performed several numbers.