On the evening of February 26, 2008 Renee Dueck passed away peacefully with her parents by her side

after a two and an half year long journey through leukemia at Memorial Sloan Kettering Cancer Center in New York.

She was born on March 18, 1984 in Winnipeg, Manitoba, Canada. She was predeceased by 2 brothers, and her grandpa Reimer.

Renee was always active, when she was less than a year old we called her twizzler. When she was 7 she decided to move to the bedroom downstairs, and in no time she had moved. After her high school grad, she joined Youth With A Mission, and traveled to Asia with her group, including a visit to Angkor Watt in Cambodia. She was on the YWAM wave tour through the US in 2005 when she was diagnosed with leukemia and successfully treated at MSKCC. 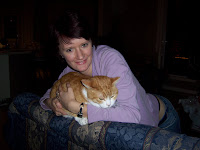 She went to Capilano College in Vancouver for a 1 year course in Film Production. She enjoyed all the jobs she got in the industry and was devastated when in October 2007 she relapsed and had to go to New York for treatment. She has been under the wonderful care of Dr Steinherz and Dr O’Reilley since then.
Posted by The Duecks at 3:02 PM