Over the last 7 months, we have been concentrating on Renee, and her health needs. Alayna (19), we thought, was a well-adjusted Christian teenager, going to university, attending church, volunteering for choir, drama, and youth leadership. In June she started hanging out with this rock climbing enthusiast guy, who was also working part time at the Centennial Concert Hall.

During my first meeting with him, I found that he had no moral compass, no sense of God, and was totally illiterate as far as the Christian message is concerned. I presented him with a How to Find God New Testament, and reviewed the basics of salvation with him, urging him to read the Word for himself. He attended church maybe a ½ dozen times.

From time to time I would discuss issues with Alayna regarding Joel and faith. He claimed to be a Christian on the basis of following the good teachings of the Bible. Over time I became more and more concerned about his salvation and the effect of his worldview on Alayna. I suggested that she should tell him she could not see him again unless he became a born again Christian. She agreed that that might be a good idea, but she never acted on it.

She knew that I was concerned about her relationship with Joel, and my opposition to her continuing on with him as long as he did not commit himself to the Lord. I asked her if she wanted me to get to like Joel. She said she would. I told her that if she would go away for 3 months to study (all expenses paid) at one of the Torchbearer Schools in Spain http://www.riovida.org/ and if, when she came back, she still wanted to date Joel, then I would make a real effort to get to like him. She thought that would be a good idea.

I took to calling him Mr. Manners. Not once has he ever greeted me with anything but a grunt. Never, “How do you do Mr. Dueck?”, or “How is Renee?” He would come into the house and stand still staring like a statue. Mostly he totally ignored me.

When trying to engage him in light conversation, nothing came out, unless you started talking about issues that counter-culture people hold dear. At one after-church lunch at our house, he started to get very animated and yelling across the table about how the CIA reported Canada’s life expectancy was higher that the US’s. “Why would the CIA tell lies?” he yelled across the table at me. I am not sure what the point of that outburst was. I checked various sources and found that the life expectancies were statistically tied. If one wanted to make a point about life expectancy, Japan would serve as the best example.

At Alayna’s birthday party, she had invited some of her high school friends, including an articulate, intelligent music major. I happened to sit next to him, and had conversation with him about various interesting topics. At one point we started talking about Iraq. All of a sudden Joel piped up from the other end of the table, in that loud abrasive voice of his, “That’s a lie!” If I wasn’t so polite, I should have sent him packing then and there.

At a lunch at Joel’s parents’ house, the topic had been – is it better to burp at the table, or to fart at the table? Joel’s mom had thought farting was more polite than burping.

In January, Alayna dropped out of university. She said she wanted some time off. Originally she had wanted to travel in Europe. When I offered her the opportunity to study in Spain, she turned it down. She traveled to work with me for 2 weeks, just being my assistant, and observing my work. She said she might want to switch to an MBA program.

We heard about the “Couples of Promise” cruise with www.christiancruises.net, and we thought that might be a good break for us. Renee was at CMU.ca, Alayna said she’d go looking for a job, and Karalee was still in high school. With 2 available drivers, Karalee should be able to get around to her classes and appointments. We thought the home front was taken care of.

We needed to clean out the apartment in New York, so we flew out a few days early, cleaned out the apartment, saw a potential client there, and then flew to Fort Lauderdale to sail on Royal Caribbean's Enchantment of the Seas for 5 nights. The program on board was interesting and uplifting.

We came off the boat on Thursday morning. Finally we had phone connections. We called home. Renee answered the phone. She had an appointment with a specialist and was wondering who would take Karalee to school and pick her up after the exam. I said, “What about Alayna, what is she doing?” Renee responded with, “Didn’t you know, Alayna went to Phoenix by car? She went with Joel. They left yesterday.”

That came as an absolute shocker. Never in our wildest nightmares had we expected that Alayna would do such a thing. Clearly she had been psychologically abducted and seduced by a dangerous psychopath. What could we do? What should we do? Could we fly home right away and find her? She was not answering her cell. The message on the cell said she’d be home Feb 7. We left messages on her cell. We left messages on her friend’s voice mail.

Could we have Alayna arrested and brought home? On what grounds? An hour later we went to a beachfront restaurant for lunch. Providence seated us next to a police officer, so we could discuss our options. Turns out that the only option we would have is that if she had taken our car, we could have her arrested for unauthorized use of a motor vehicle. She did not take our car. They went with Joel’s parents’ car.

We called Joel’s mom to express our shock and dismay at this turn of events. “This goes against everything we have taught her!” We asked her to tell Alayna to call if she heard from her.

Alayna has not called. We have heard through her friend’s mom that they arrived in Phoenix.

What is this world coming to? Why is the Bible not relevant any more? Why does God’s Word not matter? Are we forgetting that we will have to “give account” for every word we utter and every sin that we commit? Do we think that God’s grace is cheap? We can sin, ask Him to forgive us, and keep sinning? With that kind of attitude, how are we salt and light?

Does she have any idea of the pain she has inflicted on us? When a child dies physically the parents feel the loss keenly and the neighbours rally around for support. When a child rejects her parents’ teachings and values, the loss is even more painful. It’s a slap in the face by the protégé you thought was going to become someone important. That heart surgeon. That individual to take over the business in the next generation. Where do we turn? What did we do wrong? How did we fail? Which conversation was the door that I did not go through to discuss values and to be her guide?

I am a Christian. I want the love of God to flow through my life. How can I get violent about this? Christ, my master, was slapped, tortured, and killed for my sake. All his friends ran away. Yet he loved them. He forgave them. Can I forgive him? Them? I must! I don’t like it but I must! Jesus said that if we don’t forgive others their transgressions, he cannot forgive us ours. I am not perfect. I need God’s forgiveness in my life. I need his healing balm in the worst way right now. So I must learn to forgive whether I like it or not.

Our Father in heaven, hallowed be your name on earth. We ask that through us your kingdom might increase in this world, in spite of the difficulties we face. Thank you for providing us with an abundance of good tings, and we pray for those who have less that they too might get enough food for this day. Forgive us our sins and transgressions against you and help us to forgive those who have hurt us. Help us to respond in kindness to those who hurt us. Keep us from falling for the temptations of this world that seek to destroy us. Keep us safe from the evil one. Help us to recognize and avoid his evil plans to destroy us. For we know that You have the Power to build Your Kingdom in us. Your Glory exceeds all our pain. We pray in Jesus name. Amen.
Posted by The Duecks at 3:35 PM No comments: 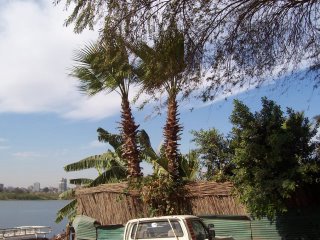 Renee is a UNIVERSITY student, enrolled at CMU and enjoying it! She is taking 4 courses. Commuting from home.

She goes for a blood test every week. Wednesday last week she got her blood test. Dr decided she needed more blood. Had to go to Concordia Hospital for a blood match draw. The soonest they could get the blood was Monday.

As long as Renee’s blood counts continue to go up, she does not need to go to New York ‘till end of March for a bone marrow aspiration. Every 3 months she will have to get the check up till they declare her cured!

Martha and I are booked to cruise! Couples of Promise from Fort Lauderdale Jan 21 on Royal Caribbean's Enchantment of the Seas! We are booked for 2 days at Beachcomber Resort. Would be nice to see King Tut and the Everglades Park. But then, we really want to relax and recharge.

On the way to FLL we are scheduled to stop in NYC for a few days to clean up the apartment. If any one would like a week in NYC let us know. We have the apartment till the end of March. C$1,000 a week would help cover the costs.

We helped one of Justin’s friends move last Saturday. Justin seems to think he is doing better, and is looking for a job.

Alayna is tagging along with me in January to get a feel for business. Karalee is back home from Egypt, recuperating from the stress of overseas travel, and back in Gr 11 at River East.

Many of you keep asking about Renee, assuring us of your prayers for her, and for that we thank you. May God bless you real good!
Posted by The Duecks at 10:55 PM No comments:

Christmas is the BEST

We were all together this Christmas. We had a good time with the extended family gatherings etc. Click here to see our pictures 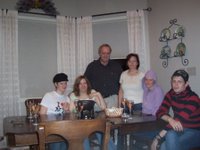 On Wednesday Karalee joined Antie Rose and cousin Amber on a trip to Egypt. When Karalee called back, her 1st comment was, "I think I over romaticized Egypt!" I am sure she will have a good educational time. We expect her back on Friday.

We have not heard from Justin yet.
Posted by The Duecks at 4:24 PM No comments: