Many people received a blessing in meeting outside during the summer getting to know more people.
Ambassadors of Christ Canada president. Having an International meeting in Atlanta. Brian has now slipped into the position of International Director.
Mrs Eleanor Gingrich passed away this week. Remember her family in prayer.
Howard Moore will be speaking next week.
We have heard the Joyful Sound
Jesus Saves
Acts 28
2 years Paul lived in a rented house in Rome and proclaimed the Gospel unhindered.
Acts 1 Jesus left after proving He was alive. He spoke over and over about the Kingdom of God.
The heart of the Christian message is that Jesus is alive. Where 2 or 3 are gathered together Jesus is there. ❤ He has given us the Holy Spirit.
Every step we need to ask what should I be doing?
There was an expectation that the Messiah would restore King David's Throne. There were misunderstanding of the kingdom
1. Not a territory.
Not a new power Centre of the world. Be witnesses.
The disciples were narrow minded thinking that the Israel kingdom was going to be restored.
God's kingdom is within you. Your heart. Not a human territory.
2. Timing. Now? No. God knows. Don't bother guessing. Lots of people think we're in the end times now. The China virus has stopped the world. Hundreds of dates have been predicted for Jesus's return.
Don't be concerned about the timing.
3. The kingdom is about the Holy Spirit. It's here now. Since the day of Pentecost. That's when he came to live in us.
The Kingdom of God is here now. Half of the world has never heard of the 1st coming. Why be worried about the 2nd coming?
Be anointed with the Holy Spirit to do your ministry. Surrender to the Kingdom of God. Lord what is your will for me today? God works through us. Your kingdom come through me. My kingdom is done.
God is the King. He helped the disciples turned the world upside-down. All except John died a an early unnatural desk.

Posted by Raymond Dueck at 3:28 PM No comments: 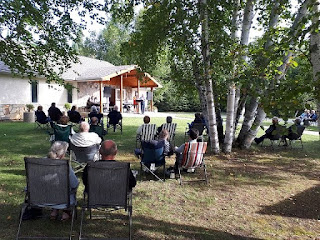 Sawatzky special music:
Michelle is on the way back from BC so her sister in law Shannon, her daughter, Michelle's father, and brother provided the special music for the church on the lawn.
Series from the book of James
Last week, The brevity of life
What do we do with our troubles? Pastor Brian Hamilton
Pray for essential workers
James. The last in the series for the summer.
"Just Do It" is the theme of the book.
This is a controversial passage
Are any of you suffering hardships? You should pray. Are any of you happy? You should sing praises. Are any of you sick? You should call for the elders of the church to come and pray over you, anointing you with oil in the name of the Lord. Such a prayer offered in faith will heal the sick, and the Lord will make you well. And if you have committed any sins, you will be forgiven. Confess your sins to each other and pray for each other so that you may be healed. The earnest prayer of a righteous person has great power and produces wonderful results. Elijah was as human as we are, and yet when he prayed earnestly that no rain would fall, none fell for three and a half years! Then, when he prayed again, the sky sent down rain and the earth began to yield its crops.
James 5:13‭-‬18 NLT
https://bible.com/bible/116/jas.5.13-18.NLT
We all have troubles. Pray. Look at Job as an example. Troubles don't magically disappear.
Persevere. You've been forgiven so you are righteous. Elijah is just like me? No rain? Miracle food? A boy came to life. Ignite the sacrifice?
Jezebel threatened to kill him and he ran. Got depressed. Just like us. Nothing intrinsically special about him.
Pray. Praise. Acknowledge what God has done.
3. Sick? Call the elders. Controversial. Anoint with oil. Be healed. God doesn't always heal. Sometimes He does.
7 points. 1. Sick. 2. Call the elders. Pray OVER him. Someone mature. James was the 1st book. Elders was a new term. Leaders of the church.
3. Anoint with oil in the name of the Lord. Sacramental? Medicinal? Symbolic? Oil is symbolic of the Holy Spirit.
4. Prayer of faith. Doesn't always work. Peter's shadow healed people. His handkerchief healed people. Jesus only healed 1 person at the pool of Siloam. Paul had a thorn in the flesh and God didn't heal it. V14 under the authority of the Lord and His will. We need to conform to God's authority and Will.
Listen to God. Spend time with him. Subject to His Will. Trust him. Your Will be done. Not my way.
Be careful not to bring leanness on your soul.
Prayer of faith. We're confident that He can and will if he chooses.
6. Confess your sins
7. God will raise him up. Believe God can do it. Stan was healed on pastor Brian's prayer.
This world is not my home, I'm just passing through. Pray. Raise him up may be to bring him into eternity.
Posted by Raymond Dueck at 3:24 PM No comments: