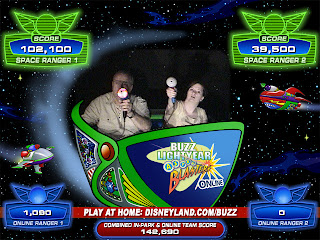 Spent the day at Disneyland and California Adventures. Had bought new shoes and they created a lot of foot pain for me on top of the knee pain. Wish I had rented a wheelchair. That would have got us to the front of the line faster. More pictures
Posted by The Duecks at 9:43 PM No comments:

Memorial day
5/29/07 Star wars- slow to get here. Saw the helmet display, spent some time in the fan room and bought a few things.

At 3 o'clock we went to Hollywood. Kara was anxious to see the Kodak theatre. Not quite what she expected. Bought some stuff. Had a bite to eat and went back to watch the History Channel's coverage of the phenomena of the Universe of Star Wars. What a story!

You never outgrow the need for a mentor.

"I love you." "I know." The most romantic line in all literature.

Evil exists. Darth Vader radiates the glamour of evil. Unstoppable. Anakin was gripped by anger and power and that ultimately destroyed him. Impatient. Spoiled teenager. Listens to the wrong mentor just ike Eve in the garden of Eden. Sells his Soul to the devil as in Paradise Lost. Lucifer's pride way is his downfall. Anakin ends up in hell. So much symbolism. He lost his humanity. He paid the price.

We need to watch Star Wars when we get home.

Tomorrow we go to Disney's California Adventure. Wednesday to Universal and Hollywood and Thursday to Knott's Berry farm and the beaches. A bit of shoping on Friday and home by 9 pm

Back to work next week.
Posted by The Duecks at 10:57 PM No comments: 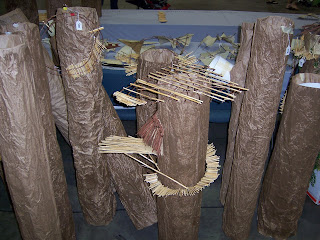 5/27/07 were planning to go to the 9 am service at Saddleback but when we saw they have a 6:30 service we decided to go to Star Wars in the morning
10:00 am Creating new worlds interviews w the designers and model makers.
11:00 am Fan Fair hall where the fan clubs demonstrate their diorama and model building skills.
Long line up for a Starbucks Coffee. I'm so tired I could go back to the hotel for a good sleep.
1:00 pm One Man Star Wars trilogy. By Charlie Ross, who started it as a one man show off Broadway.
2:30 pm Billy Dee Williams and the Lando diaries. Hosted by Scott Chernoff - Star Wars nerd. Very funny. Debonair.
4:30pm The Force of The Fetts in Concourse Hall with Jiay La'Guya from Australia
Reunion of friends.
the youngest- Daniel Logan from New Zealand now in college. Boba Fett as a child.
Jeremy Bullock the flying adult Boba Fett
Temeura Morrisson Jengo Fett

6:30 pm www.saddleback.com for church. Got there 15 minutes late partly because there were 2 Portola parkway exits.
Rick Warren pastor preached on "Setting Financial Goals"
Tithe 10% save 10% no matter what. He has a dozen billionaire friends. They all follow that principle. Only buy what you need. Wear it out. God wants to be your financial advisor.
Provide for family needs. Not greeds. God expects it. 1 Tim 5:8 Don't live beyond your needs.

Testimony: Mary Hunt grew up poor and wanted to be rich to have what she wanted. Maried Harold - a banker. She got a credit card. Got into fights with her husband. He quit his good job to get into multi-level marketing. Lost everything. She finally saw her cheating heart and made God a promise to tithe and save. Spent 10 years in frugality and thrift. Her husband started calling her "my little cheapskate" They paid back more than $100,000 in unsecured debt. Now they own a business.
Use some money to grow your character. Grow Spiritually with Seminars Conferences Fitness memberships.
He bought his first Bible as a teenager. Cost 2 month's allowance. Still have that Bible today. Better to have wisdom and knowledge than to have gold and silver.
Buy some good books.
Use some money to help others. The only safe investment for eternity. 2,000 verses about helping the poor.
Saddleback Church is the most generous church in North America. 1.6 million $ raised in one offering for the tsunami plus $1.7MM for hurricane victims.
Nothing becomes great without sacrifice. Are our greatest days behind us or before us? Start tithing today!
Luke16:9 Give to get some friends into heaven. That is the highest use of your money. There will be people in heaven because of your help.
Only people who don't know God are always worried about money. Circle the words about heaven.
You can pile it up on earth or in heaven. If your treasure is on earth, you get one day further away from it every day.
8:45pm dinner at Memphis Bar B-Q Company. ''We didn't invent Bar-B-Q it just tastes like it"
Posted by The Duecks at 11:59 PM No comments: 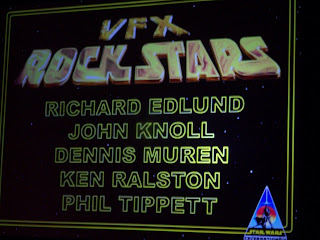 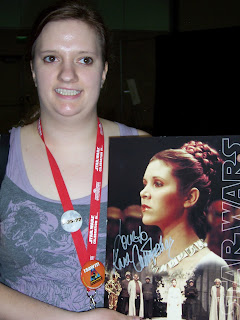 I'm blogging from my PDA
Karalee and I are sitting in line waiting for Carrie Fisher (Princess Leia) to come back from her break. We've been in the line since 12:10 and we'd like to go to the next stage show at 2:30
It does not look like that will happen.

Martha called from Peter & Trudy's cabin. She's out camping on Hecla with the Reimer family this weekend.

Justin went to Lonnie's place so he wouldn't be home alone. He still has a very serious case of the flu he's been battling for 3 weeks.

Renee now has a job at Value Village. Not her first choice but something to keep busy.

Alayna is going to start painting houses soon. She wants to earn her own way thru university. Very independent of her parents. Enslaved by her boyfriend. Pray for her.

Karalee is trying to decide what to do next year. She'd like to go to university to study film production. Her parents would like that to be in a Christian environment. Pray for her.

Business is more than busy and often requires more wisdom than I have.

We did eventually get that wonderful signature after a 3 hr wait. Then it was time to go to a costume making work shop and from there to a play "star wars in 30 minutes" after a 1-1/2 hr wait.

After that it was time to line up for "a conversation with Carrie Fisher". Another 1 hr wait for 1 hr show.

What is the moral of the story of Star Wars?

Anikin Skywalker is born of a virgin and has more ''Life" in him than anyone else. He is looked up to as the Promised One.

He thinks he knows more the his teachers. He wants to be recognized as a Jedi (leader) before he is ready. He has nightmares about his wife Padme dying in childbirth. When he starts to listen to the Dark Side he is convinced he can save his wife, if only he turns to the dark side. When he does, he loses everything and becomes the evil Darth Vader, Dark Lord of the Sith. In the end his son Luke demonstrates real love and he turns away from the Dark Side just before he dies.

In short- listen to those who love you and you will avoid the dark side of life.
Posted by The Duecks at 2:28 PM No comments: 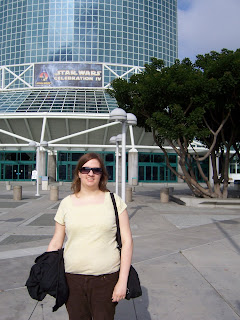 Father Daughter graduation trip.
Karalee selected where she wanted to go, and I'm really enjoying my time with her. We left Calgary on Tuesday morning after Tyler and Chrystel's wedding (Monday). Los Angeles is a lot crummier than Karalee had imagined. I am posting the pictures to www.dueckpics.blogspot.com.
George Lucas's Star Wars 1st showing was 30 years ago today, in 30 theatres. The word blockbuster was invented to apply to Star Wars. It ran in theatres continuously for more than a year. Many of the words invented by George Lucas, are now in the standard dictionary.
The US Post Office released 15 new stamps yeasterday to celebrate the 30 years of Star Wars and the impact it has had around the world.
Posted by The Duecks at 9:42 AM No comments: