The church for people who aren't into church 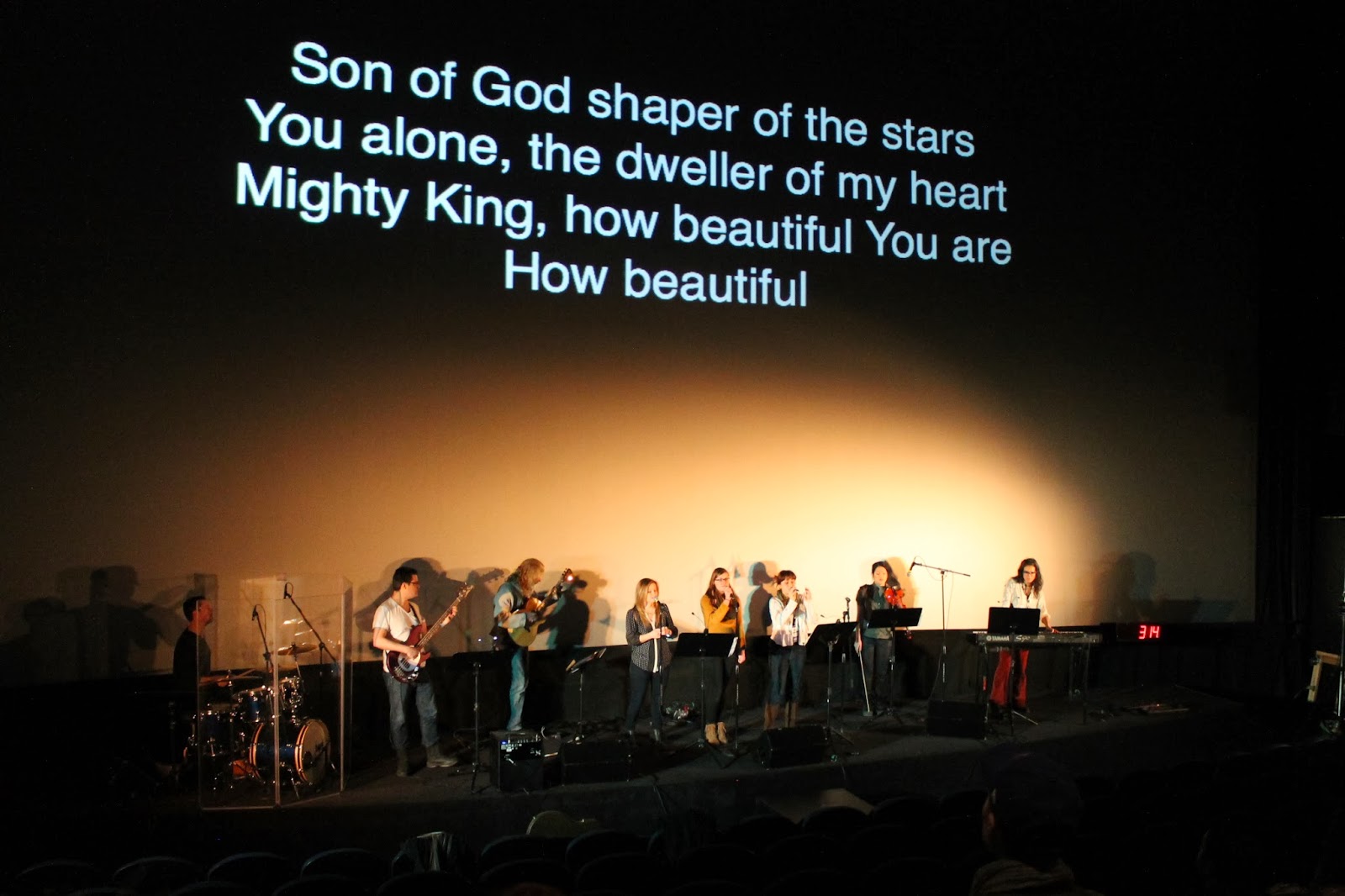 Www.themeetinghouse.org
Vince lead pastor
Wide awake.  Week 2
Our being wants relationships. There are seasons of dryness.
Vaporub was mommy's quick fix for colds. And rectal temperature.  That prevented us from pretending we were sick. We didn't know there were other options for dealing with colds.
Used to try to have 1/2 our devotions.  That was not working for me.
Went on a canoeing trip. Went out swimming in the buff and got caught by a family of canoers.
That was a time of worship and feeling close to God.
Galatians 4.13 For you have been called to live in freedom, my brothers and sisters. But don't use your freedom to satisfy your sinful nature. Instead, use your freedom to serve one another in love. 14 For the whole law can be summed up in this one command: "Love your neighbor as yourself."5:14 Lev 19:18. 15 But if you are always biting and devouring one another, watch out! Beware of destroying one another.
As we walk with the spirit there is freedom to choose to walk in the spirit.
Fruit of the spirit is love joyfulness peace...
A life in Jesus is spiritual fruit.
Are you missing something?  Gary Thomas lists 9 types of people by temperament. Naturalists.  Traditionalists.  Ascetics. Activists. Caregivers.  Enthusiasts. Contemplatives. Intellectuals. Lifestyle learning.  Sensates. Taste touch smell sight. Rembrandt's Prodigal son painting.
Online tool. Read the book.  Or do the test. http://common.northpoint.org/sacredpathway.html
Read summary of the book http://www.garythomas.com/books/sacred-pathways/
Wake up all believers.
Posted by Raymond Dueck at 9:59 AM No comments:

"The dividing line between good and evil runs right through the human heart." Solzhenitsyn

Life after God.  Coupland. I need God.  I need him to help me.

Without God nothing makes sense.  Jesus was anti religion.

5 simple things.
1. Humans designed for relationships. Not rules regulation doctrine
2. Humans have incredible value made in the image of God. Not random atoms.
3. There are real choices to be made that makes a real difference. Not better by ethics
4. There is such a thing as real love.  Jesus came to save
5. There is a big story. We can't just think that everyone can invent their own way.
It all centers on Jesus.
God is generous and there is room for everyone in God's house.

Q&A
Why are Christians so self righteous? They shouldn't be because the Bible says we are all filthy.

God relates to us personally.  There are fundamental major differences between Christianity and other religions. Islam teaches the opposite to the Bible. Love is not part of Islam. Very different. To say all religions are the same makes you very self righteous and arrogant.  All these people that believe what they believe don't agree with you.
We need help.

Mike - what happens to Christian soldiers that just killed someone and then got killed.
Just wars theory.  Sometimes wars are inevitable. Sometimes killing is not murder.

Christ is the only One that can give deep soul satisfaction.  Too often in our age of consumption we keep being hungry because we chase the wrong things.

If you join Christ he promises you'll have trouble but the rewards are well worth it.

In Islam persecution of Christians is real.  We tend to water it down.

Tamara worked with atheists soldiers.  Be good for goodness sake. We need to watch that the secular humanists and atheists don't steal biblical values.

Dr Leff, atheist philosopher says we are all the same. Why can't I decide to poison everything.  Good does not exist without a higher powers.

Do we have better thinking now than 3000 years ago? We are so specialized that we don't connect the dots.

Freedom from or freedom to achieve our purpose.

Craig Evans. Acadia. Good scholar. Paul and James wrote occasional letters. He died for his faith.  James dealt with the Jewish Christians. Paul with the the Greeks. So their letters are different.  Check the book of Acts. They agreed.

Sort your ideas into show stoppers and rattlers. If you want to be an atheist what are the problems. Physics converts people into theists.
Pakistani pastor was tortured. Christians in the west are afraid of being laughed at.  We need a revival of confidence.

Intellectual lens can deal with it.  Christ deals with it. He comes too late.  Jesus wept. He was angry at death.

When we look to Jesus it's unique,  rare, to see a God of love.  Because of that we can trust him. Job did not talk about God he spoke to God. Our God is not silent. He went to the cross.

The God of the Bible wants to be understood. That's why we need good translations.

Posted by Raymond Dueck at 9:08 PM No comments:

Luke 15 Tim Keller writes about it in the book "The Prodigal God"
Both sons wanted the father's stuff. The older son needed to repent of his goodness.

Colossians 2.20 why do I so often live the old life?

Why do we need markers to show we are so nice?
Why do we think our house has to look like we don't live here? Why do we have to clean up before we can have visitors?

Part of living with Jesus is to repent of our righteousness. Develop a Habit of joyfulness thankfulness. confess the deep dark secret.

Colossians 1-4 are the best verses in the Bible.  You have been raised to a new life.  A gift given to all those who embrace it. Life eternal. God breathed life into us

It's a new beginning.  Cake for your born again date.  We could have cake in church every Sunday. do you recognise that you are new?  Seek things that are from above.  Reorientation of life.

Repentance is a 180º turn.  Not just sorry. Set your mind on things above.

We live in a world that shapes us. Do you create space for God on your life? To dialogue about God with others?  Care group?

Your story is what has shaped you to who you are. Somewhere you had an encounter with God and your life is changed.  The past is redeemed by Grace. Your life is now defined by the grace of God! Your life is a gift.  Live to show it!

Posted by Raymond Dueck at 4:40 PM No comments:

Dave Ens
Col 2
Live your life abounding in thankfulness. What are you thankful for?

In Christ. 2 short words that make a giant difference.
It's about losing myself in Christ.
Dating is: I like being with you. Marriage is I'm giving myself to you. I'm doing what you want me to do. Being in Christ is I'm relinquishing my rights.

Is Christ at the centre of your life? Colossians were under pressure to conform to the religious demands of the Jewish leaders.

Discontent is a big deal in our society. We "must have" all the stuff.

Jesus asks us about the simplicity of following him.

Jesus triumphed over everything.  He has won the victory.  He defeated the enemies on the cross.

The evil powers thought they had the victory when they hung Christ on the cross. But he rose from the grave.

Col 2 you were raised with Christ.  He erased the record against us.

Greed envy lust are not the real thing.  Christ is the REAL one.
Turn your eyes upon Jesus. Look full in his wonderful face.

Posted by Raymond Dueck at 10:46 AM No comments:

Dave Ens www.EasTview.org
Mark 10 a man RUNS to Jesus asking what do I have to do to grab unto the good life.

Jesus asked him a question back. Have you done everything right? Yep! I'm a good guy.

Sell everything? The issue is not money. One thing is important. Follow me. Jesus said. It's that simple.

We talk about stuff. It all boils down to FOLLOW JESUS. Leading people to Christ and on to maturity in him is ONE process.

We will use the book of Colossians as our guide in the next number of weeks as we unwrap what it means to follow Jesus.

Paul starts the book with a beautiful prayer.

We always pray for you, and we give thanks to God, the Father of our
4 Lord Jesus Christ. For we have heard of your faith in Christ Jesus and your love for all of God's people,
5 which come from your confident hope of what God has reserved for you in heaven. You have had this expectation ever since you first heard the truth of the Good News.

9 So we have not stopped praying for you since we first heard about you. We ask God to give you complete knowledge of his will and to give you spiritual wisdom and understanding. Then the way you live will always honor and please the Lord, and your lives will produce every kind of good fruit. All the while, you will grow as you learn to know God better and better.

We don't live the fullness of what God has done.

May you be made strong. Rescued forgiven made free by what God has done through Christ.

Colossians 1:15
The song the church sang right after Christ's resurrection. Jesus is the image of God. The fullness of God. By making peace through the blood.

Christ is the visible image of the invisible God. He existed before anything was created and is supreme over all creation,
for through him God created everything in the heavenly realms and on earth. He made the things we can see and the things we can't see—such as thrones, kingdoms, rulers, and authorities in the unseen world. Everything was created through him and for him.

He existed before anything else, and he holds all creation together.

Christ is also the head of the church, which is his body. He is the beginning, supreme over all who rise from the dead. So he is first in everything.
For God in all his fullness was pleased to live in Christ,
and through him God reconciled everything to himself. He made peace with everything in heaven and on earth by means of Christ's blood on the cross.

The one who created you is the one who saves you. He does not leave us alone.

Colossians is a chewy book. Lots to digest.

Posted by Raymond Dueck at 12:23 PM No comments: