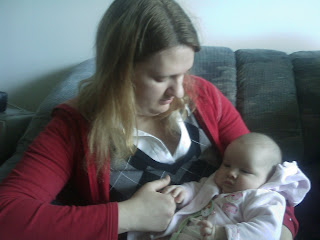 Kara's cousins, Makayla and Kim the youngest and oldest cousin are 30? years apart. It's exiting to have a new niece!
She lives in Ottawa and this is the 1st time many of us have seen her. Congratulations to Shirley and Dave.
Posted by The Duecks at 8:02 PM No comments:

Football
Dave Ens Eastview
Wife gave a nice football early in marriage
She doesn't like football. So the ball sits on the shelf - useless. It is waiting to be played with.
We all have useless stuff in our lives - when are we going to start doing something?
God's Grace. A grace filled community is a blessing to others. The gifts you have been given are intended to build others up.
We all have a football sitting around. We have to decide to play with it. Your gifts are an expression of God.
Impossible becomes possible. Phillippi has become a complete ruin. In Paul's time Phillippi (Little Rome) was the retirement center for the faithful. Ceasar called himself the son of God - so Paul waded into an impossible situation. Acts 16:9-11 Paul called to Macedonia
v11-15 Paul found some women worshipping at the river. No men. He preached anyway and a church was born.
v16- Paul ordered evil spirit out of a girl. We often complain but never do anything about it. Our heart might burn about something but we ignore it. Maybe that is God calling you to step into a situation. You may get banged up but the joy of playing the game is your reward.
Paul & Silas were beat up and jailed. We are often too afraid and so we are pain free and joy free. Doing nothing.
v33- the jailer became a Christian after God sent the earthquake. Paul did not run away. He stayed to see what God would do. You can tell when someone gives all that they can do.
Your gifts are real and make a difference.
What are you going to do with your gift?
Lord here I am. Use me as you would for your honor and glory.
Do you dare to pray that prayer?
Posted by The Duecks at 12:11 PM No comments:

Any feedback? This would be engraved on a BC HuckleBerry Jade river rock one side polished boulder.
Posted by The Duecks at 4:07 PM 1 comment: 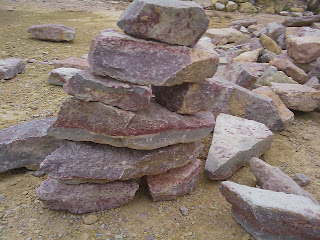 this is at the Mariash Quarry in Stony Mountain. we picked the stones and assembled it there
Posted by The Duecks at 3:50 PM No comments:

See the gypsy kids enjoying our attentions in Thessaloníki Greece. Click HERE
Posted by The Duecks at 10:25 PM No comments:

Two week before Kris died he was in the hospital for one of his many admissions. He was much better after a week so we wanted to take him home. The doctor in charge got mad at us for suggesting he was ready to go home and threatened never to see him again if we discharged him ourselves, so we didn't. The next day we were not able to come visit Kris in the hospital. The following day, when we came to see him, we checked his chart and were shocked that he had been given 10x the normal IV fluid. When we asked why - "that's what the doctor ordered".
A few days later he was transferred to to ICU due to interstitial lung fluids and congestive heart failure. When I checked his master file in the ICU, the chart from that fateful day was missing. Evidence removed. No proof of malfeasance.
The night before he died his mom and I were encouraged to go to the hotel to get some rest. At 4:30 we got the call to come to the hospital and by 6:30 he was gone. Later that doctor met Martha and quite cheerfully told her that she had heard we had a tough morning.
When we had our lawyer check into it, we got a long report that said that he died because of his underlying condition and there was no malpractice. That doctor continued to work at that hospital for 30 more years and killed a whole lot more kids. Retired with honour.
Kris, our firstborn, lived for 3 years and 3 months.
Dr O'Reilley was doing successful transplants in New York at the time, but we did not find out about that for another 8 years. When we kept asking the Winnipeg doctors for referral elsewhere, we were told that Kris was getting the best treatment in the world.
We weep.
Posted by The Duecks at 10:04 PM No comments: