Every corner and restaurant carries a memory of Renee and her bubbly enthusiasm. Oh the unrelenting pain!

The Renee Dueck Memorial YWAM Center is no more. Sold to the highest bidder

Posted by The Duecks at 9:36 AM No comments: 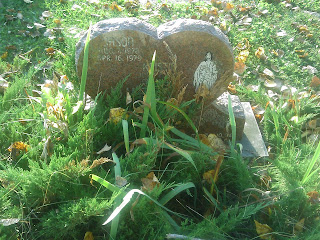 Posted by The Duecks at 9:07 PM No comments: 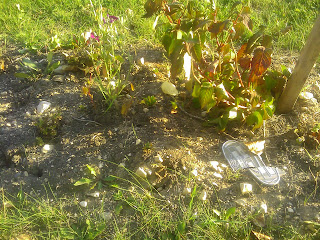 Sure needs a marker. Hopefully we'll find an appropriate granite in Vancouver this week.
Posted by The Duecks at 9:02 PM No comments: 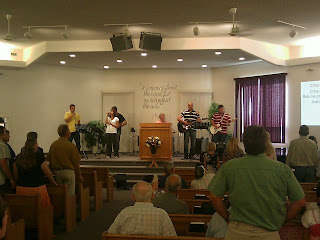 We can not direct the wind, but we can adjust the sails. - Morweena Church stage

Glen Plett Pastor.
Silage truck drivers drive the same dusty road day after day.
We ask? Why are we doing what we do?
The potato peeler is useless for changing a light bulb cutting an apple or most anything I'd like to use it for.
We live life and we do repetitive things hopefully with purpose.

Live with Purpose! The Purpose Driven Life. Thirty million copies have sold in 4 years.
Each day you cook feed the kids put them to bed.
More and more people want to be buried in un marked graves because they feel life was useless.
Eccl 2:1 Says: pleasures are meaningless, houses, gardens, parks, watering systems, gold, silver -he, hated them all because he'd have to leave them.
Ch 12- when we get old, desire is no longer stirred. All is useless.
Went to relative's funeral this week. Empty church. The family shared memories. Ben lived all his years running from God. In the last months he turned back to God. Lots of regrets.

All summer long I waited for the opportunity to take pictures of flowers. By last Sunday it was too late. They were faded.

Solomon was concerned about not enjoying life. Many of us live all our adult life wishing for something better.
We need to learn to live intentionally- enjoy life with purpose and meaning with what we have.

If you fix your neighbour's fence you may be the most fulfilled person in this community.

Excel in building gifts that build up others.

Think about why! why are you doing what you are doing.

Be blessed.
Posted by The Duecks at 2:30 PM No comments:

Dave- we will miss you 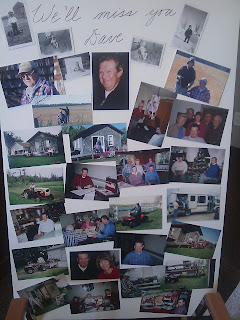 Your enthusiastic smile was such an encouragement. You truly demonstrated God's love in your life. Your parents will miss you with unrelenting pain. We weep with them.
Posted by The Duecks at 1:52 PM No comments: 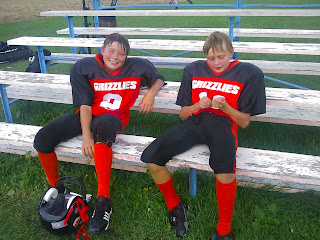 Andre led the scoring to win the game 57-7
Posted by The Duecks at 1:45 PM No comments:

Things said in Secret (from Our Daily Bread)

Some say that anonymity is the last refuge for cowards. Judging from mail and comments I’ve read that have been submitted anonymously, I would agree. People hiding behind the screen of anonymity or a false identity feel the freedom to launch angry, hurtful tirades. Anonymity allows them to be unkind without having to take responsibility for their words.

Whenever I am tempted to write something anonymously because I don’t want to be identified with my own words, I stop and reconsider. If I don’t want my name attached to it, I probably shouldn’t be saying it. Then I do one of two things: I either toss it out or I rewrite it in a way that makes it helpful rather than hurtful.

According to Ephesians, our words should edify and impart grace (4:29). If I’m unwilling to use my name, there’s reason to believe that my motive is to hurt, not to help.

Whenever you’re tempted to say something in secret—perhaps to a family member, co-worker, or your pastor—consider why you don’t want your name to be identified with your words. After all, if you don’t want to be identified with your words, God probably doesn’t either. He is gracious and slow to anger (Ex. 34:6), and we should be the same. — Julie Ackerman Link

O Lord, help us to turn aside
From words that spring from selfish pride,
For You would have Your children one
In praise and love for Your dear Son. —D. De Haan

Anonymity can be a coward’s way of hiding behind hurtful words.

Posted by The Duecks at 9:03 PM No comments:

Pastor Del
Community Travel
Ultimate Church Tour
Jerusalem is 3000 years old
Walked through the city for 18 hours, via de la Rosa, the wailing wall
Jesus desired the city to become the authentic Community
Acts 1:4-8 Start in Jerusalem.
A group was waiting for Jesus' power. Acts 2:42-47 Shared everything. Many being saved. A picture of the 1st Community

Drama what is my problem
Not Connecting
news channel does not help
I try to connect email twitter TV does not help.
the cacophony can be too much. We can't see or hear real friends

Hazards to 24/7 Community
1. Consumerism negates Community Acts 2:49
Help out lead a Care Group
2. Individualism feeds superficiality It take away your willingness to serve. All the believers shared.
3. Anonymity erodes accountability Always! All believers were DEVOTED. SOLD OUT! They spoke truth to each other. We need the spirit of community
4. Loneliness gives birth to apathy Acts 2:43
Solve the neighbors' kid's bike problem and community is born. It becomes an AWE experience.
Sin is the disconnect for God and others. Community is a journey No one is perfect. We all fail God's glorious standard. Of helping others.
Get plugged into a care group today.
Posted by The Duecks at 12:31 PM No comments: