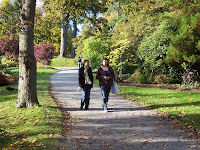 We finally arrived in Halifax. So good to see and spend time with Kara again. I had missed her so!
We went to the park close to her place and then drove to Fortress Louisburg, the largest historic reconstruction in North America. When the British conquored the fort they hired demolition experts to blow up miles of fortified walls and 100s of buildings, to make sure the French would never again rebuild it. In the 60s the Cndn gov't decided to spend megamillions rebuilding 1/6 of it. So a few people would come and admire the rebuilding job.
Cape Breton is the world's premier Celtic region, and they had their concluding concert featuring Rita McNeil on Saturday. We tried to get tickets, but they were VERY sold out. So we had a nice meal instead. Sunday we drove to a small start up church in Glace Bay for the service and saw the Marconi historic site before heading back to Halifax. Our final supper with Kara was at Thai restaurant. Renee was there in spirit.
Posted by The Duecks at 4:52 AM