Indiana Jones and the Ark 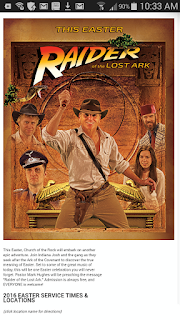 Where is the Ark of the Covenant?
In Ethiopia?
Pastor Mark tells us where the Ark is. Revelation 19:11
Raider of the lost ark is Jesus
Matthew 27:45-54  Now from the sixth hour, darkness fell upon all the land until the ninth hour. About the ninth hour Yeshua cried out with a loud voice, saying, "Eli, Eli, lema sabachthani?" that is, "My God, My God, why have You abandoned Me?" When some of those standing there heard it, they began saying, "This Man is calling for Elijah." Right away one of them ran and took a sponge. He filled it with sour wine and put it on a stick, and was offering it to Yeshua to drink. But the rest were saying, "Leave Him alone! Let's see if Elijah comes to save Him." And Yeshua cried out again with a loud voice and gave up His spirit. And behold, the curtain of the Temple was split in two, from top to bottom. And the earth quaked and rocks were split apart. Now the centurion, and those with him keeping guard over Yeshua , when they saw the earthquake and what was happening, they became terribly frightened and said, "This really was the Son of God!"
1. Jesus raids the temple. Fashioned a whip and overturned the trading tables. 40 years after that the temple was ripped apart stone by stone.
The veil of the temple was ripped in 2. The holy of holies had a huge veil. 4 layers thick. The earthquake could not have done that. Only the finger of God could do that. Jesus shed his blood. The Old Testament system was finished.
2. He Rescued the Hostages We are all captives of the sin nature. We are not inherently good. How do you explain Stalin Hitler Rwanda slave trade?
Guilt is a gift that keeps on giving. Weekly confession. Hail Mary. Penitence.
We talk about forgiveness glibly. Jesus bore your sIns and God forsook him.
A chief's mother was caught stealing and ordered to get 20 lashes. The chief came and covered his mother so the mother did not get the lashes.
3. He releases the Captives
Matthew 27:45-54
The old uncles came back to life. Jesus went down to the lower part of the earth and released all the Captives and took them to heaven with him.
Come you are no longer hostage to sin.
Being a Christian is about making Jesus Lord of your life.